I wonder how many will land here after they Googled looking for something totally different?

I had been looking forward to this race for quite a while.  I love Key West, and having the chance to get a closer look by running through the streets and past the landmarks was something I could not pass up.  Luckily, this race fell during our son’s fall break, so we made a vacation out of it.

We came to the keys the weekend before, and spent the week enjoying all they had to offer.  This also gave us time to attempt to get adjusted to the heat.  My wife, Joyce, and I ran a couple of times during the week to see what it was like in the heat.  We knew it was going to be a challenge, just like it was in Disneyland, maybe even more so.  I was just glad I was not running the marathon.  We picked up our packets early on Thursday before the Saturday race while we were in Key West.  In a nice twist, they provided hats in addition to t-shirts for all the runners.

Then, on Saturday we got up early and headed down to Key West for the 6:45 a.m. start.  The race started right outside the Rum Barrel restaurant.  This was a smaller race, with 650 or so runners between the Marathon and Half, so the start was very smooth.

Past the Duval Street Lighthouse (so fast it was blurry)

We headed out toward the Truman Annex and into Fort Zachary Taylor State Park.  This route was classic Key West, and provided some great scenery.

Tree-lined streets in the early dawn 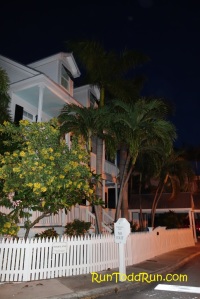 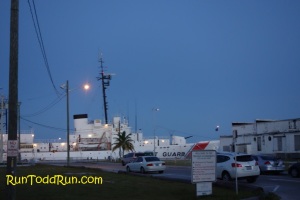 As we exited this area and headed toward the beach, the sun was starting to rise.  Although it made for a gorgeous atmosphere, we knew it was about to feel a lot hotter. 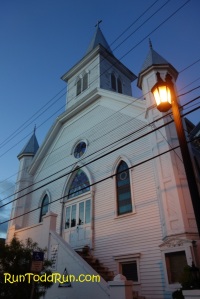 The sunrise did not disappoint.  It was truly priceless. 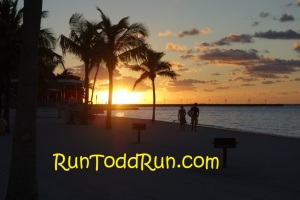 Then came the beach stretch.  That is when the heat started to announce its presence.  It is one thing when it is hot and dark out.  It is quite another when it is hot and the sun is up.  The stretch along the beach provided us with some great views, but was also a challenge since there was no shade to help.

They had a conch train of cheering fans and cowbells that made a couple of appearances.  This was a cool idea, since there was not much of a crowd on the rest of the course.   There were a couple of pockets of ardent supporters though.  One group at the beach was still there, misting hose in hand, cheering on the remaining marathoners hours later when we were on our way out of Key West. 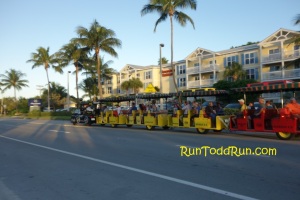 We ran out Roosevelt along the beach to the turn-around at about mile 7.5.  The heat really started to get to Joyce at that point, and by mile 9 she was really struggling.  At first, we extended our walk breaks, but in short order we were simply walking.  The last four miles ended up being mostly a walk, punctuated by an oncoming mass participating in the cancer walk, which happened to share part of the same course.

We finally made it back to Whitehead Street and trudged to the finish line back at the Rum Barrel to complete our 10th half-marathon.  Our time was over 20 minutes slower than our time at the Columbus Half just two weeks before. What a difference the temperature makes.  Still, it was great to be able sit on the top deck of the Rum Barrel and watch the Marathon finishers come in, and there is no shortage of post race shopping and entertainment in Key West. 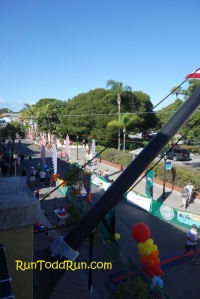 This was a tough run.  The type than can make someone really contemplate why they do this.  It was no fault of the race organizers.  They did a great job.  The course was beautiful and flat, the volunteers were awesome, the race swag was cool, and it was in Key West. However, it was South Florida in October, and the weather was challenging.  It ultimately won out on this day, as far as time goes.   But we finished.  We got to see parts of Key West we had not seen in our many prior visits.  We got to spend time together (though I was grumpy for a few miles of it), and we got to take part in a unique event. 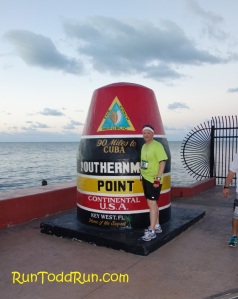