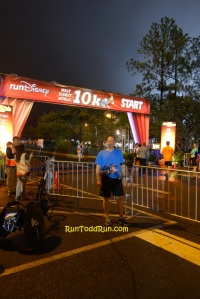 Since my Walt Disney World Marathon recap was so long, I figured I would keep this one a bit shorter.  It was only a 10K after all.  In fact, it was our second inaugural 10K, following the Disneyland 10K last August.  Ironically, the weather was very similar.  Although the temperature may have been lower at the WDW version, the humidity was definitely high, which pegged the sweat meter.

Not knowing what to expect, we were on the first Monorail to the race at 3 a.m.  That was a mistake.  We were among the first dozen or so people there it seems.  Now I know what I quiet start area looks like.  If we ever do it again, we know we can sleep in a little.

The race was divided into 5 corrals, A-E.  We were in the middle in Corral C.  I think the corral process for this race worked great as far as moving people though the start is concerned. Also, the corrals were right next to the staging area, avoiding the long walk involved in the Marathon. 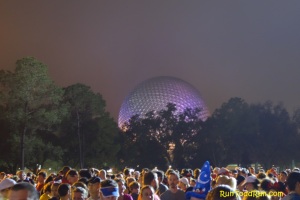 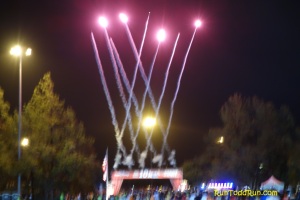 Each Corral had its own fireworks sendoff

The first 3 miles of the course took us out of the Epcot parking lot and back around to the back stage area of Epcot.  The start of the race was slow, and did not thin out until after the first mile or so.  I will echo the thoughts I have seen elsewhere that many of those participating in the Dopey challenge made the pace of the 10K artificially slow (even for me) and really crowded the course.  I am not sure what could be done about that, however, since they made up 7000 of the 10,000 participants in the 10K.

After passing under Test Track back stage, we entered Epcot in Norway at about mile 3.5.  It was really cool seeing Epcot lit up in the dark, and it made for a very pretty run, despite the humidity.  We rounded World Showcase and headed toward the boardwalk.  I could be heard several times saying, “I won’t be this happy next time I run here,” foretelling the upcoming Marathon. 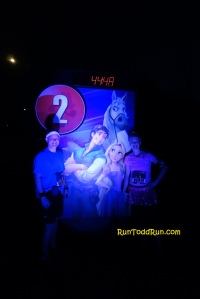 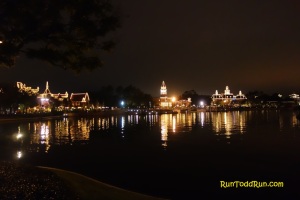 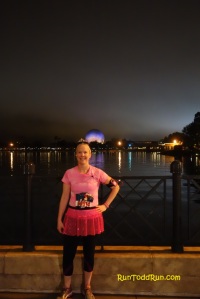 We left World Showcase at about mile 4.5 and ran around the Boardwalk area, passing the ESPN Zone and other Boardwalk attractions.  There were several characters out, but the lines were too long for us to get pictures, so you will just have to take my word for it. 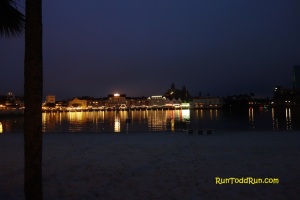 After rounding the Boardwalk, we re-entered Epcot at mile 5.5 near Journey Into Imagination and headed through Future World West to the finish, back in the Epcot parking lot near where we started. 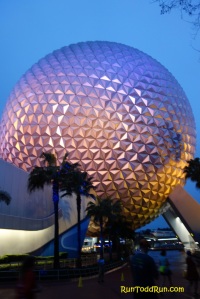 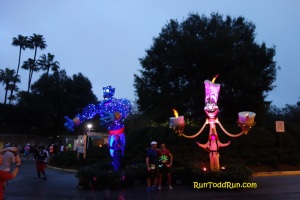 Last year these guys were at mile 20 of the Marathon

We were certainly not running for a PR, as we were treating this as a warm up for the Marathon.  Still, we passed a lot of folks making a quite leisurely jaunt of it, mostly all Dopey runners.  As a result, there was a lot of weaving in this relatively short run.  However, I did enjoy running in the dark, enjoying the lights of Epcot and the Boardwalk area.  It really made for a unique experience.  Overall, I liked the race, and would probably do it again, even knowing there will be more walkers than usual due to the Dopey runners taking it easy. 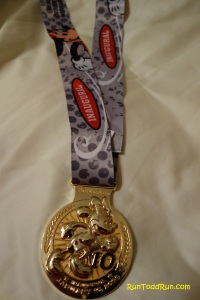 © Todd Spurgeon and RunToddRun.com, 2013, 2014. Unauthorized use and/or duplication of this material without express and written permission from this blog’s author and/or owner is strictly prohibited. Excerpts and links may be used, provided that full and clear credit is given to RunToddRun.com with appropriate and specific direction to the original content.
%d bloggers like this: