It has certainly been a while.  It seems like forever since we were finishing the Walt Disney World Marathon.   After taking some time off to recover, rejuvenate, getting back into the swing of training has been tough.   With weather and work, finding time to make those training runs has been a chore.  We were successful in getting in our long runs, albeit on a delayed schedule.  For our last long run before before America’s prettiest half marathon, Run The Bluegrass, we decided to join 6000 or so others for the Papa John’s 10 Miler.  This was our first try at the 10 Miler, which is the third leg of Louisville’s Triple Crown of Running, which earlier featured a 5k and 10k.

We registered the day before, and headed out at about 7:15 for the 8:00 start.  We parked a bit farther away than we had expected, so we were cutting it close to get to the start with time for a pit stop beforehand.  It was a perfect morning for a run, with temperatures in the mid 40s and a slight cloud cover.  We got to the start line after the National Anthem, and really never stopped moving prior to the time we got to the start line.

The course was new to us, which was nice.  We weren’t sure what to expect, and I did not have time to really study it much before the race.  All I knew is it was 3 miles of flat, 3 miles of hills, and 3 miles back.  We wanted to try this race to help us prepare a bit for the hills of Run The Bluegrass.

On To Iroquois Park!

The highlight of this race was the “threat” of violence toward Joyce, my wife.  Joyce had it goin’ on for this race, if I might say.  She had on a very well-coordinated outfit accentuated with a pink SparkleAthletic skirt, pink Lulu top, and a pink daisy Sweatyband.   Around mile 2 we heard a group of ladies exclaim, “you cannot be that cute! Look at that pretty skirt, and top and bouncy pony tail.  I am gonna take her out at the finish for that skirt!”  It was all in jest, and it was a fun start to the race.  Needless to say, no one fawned over my sweaty shirt.

A little after mile 3, we entered Iroquois park.  This is where the hills started.  We did pretty well through this section, passing a lot of people.  We ran up each hill, taking our walk breaks at the top or bottom.  After about the third hill, we hurt, but it wasn’t too bad, especially knowing there was a major downhill exiting the park at mile 6. 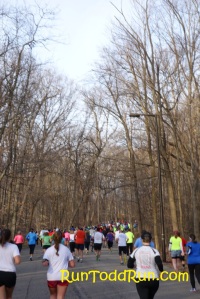 Up the first hill

Almost to the top 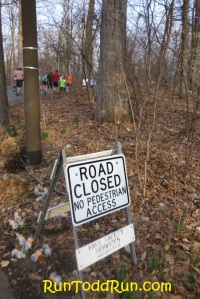 The park was really nice, and added a bit of natural beauty to the course.  However, the run out and back was through a residential parkway, and it was nice to have folks cheering us on from the front of their homes.

As we exited the park, we had about 4 miles left.  The finish was at Papa John’s Cardinal Stadium, home of University of Louisville football.  This would be the first football stadium we got to run through, after having previously run through minor and major league baseball stadiums.

We made really good time (for us) through the park, and I was letting Joyce run her pace, without a goal or pace in mind.  On this day, her pace was pretty quick, and some of our quickest miles were in the park.  Out of the park, we made our way back to the stadium.  The finish line was at the 50 yard line.

Out of the park

As we neared the stadium, I noticed we were on pace to finish around 1:45.  I know we didn’t have a pace in mind, but now that we were in the last half mile, I thought, oh what the heck, let’s see if we can make it in 1:45.  We were well on our way to that time, and I picked up the pace to make sure we made it, much to Joyce’s chagrin.  I didn’t tell her what I was doing, but she figured I had some time in mind.  I thought it would be no problem until we entered the stadium.  Instead on only having 50 yards to go, we had to run AROUND the field to the opposite side to the 50 Yard Line finish.  We really had to kick it in now to make that time.  Joyce kept up, and we made it in 1:45.

You mean we have to run AROUND the field?

There was no medal or other bling for this race.  Just the satisfaction of knowing this was a 10 mile PR for us.   They had Papa John’s pizza after the race (naturally), but we didn’t really feel like pizza that early, so we grabbed a G2 and made our way home.

Overall, the race was a great experience.  We had to do a lot of weaving to get around the 4-5 wide walkers or slower runners, but the course thinned out a bit as we moved along.  The volunteers were great, and the water stops were ample, staffed by firefighters.

We may make this an annual thing, who knows?  Now it is on the Run the Bluegrass.  This 10 miler had two miles of hills.  RTB has 13, with the first big one before mile .5 and a max incline of 9%.  It should be interesting. . .