It has been a while, and I suppose I have some catching up to do.  I will start with the Soldier Field 10 Mile in Chicago.  We signed up for this one relatively last minute.  We decided to make it a weekend trip to Chicago for our anniversary over Memorial Day Weekend.  Running a 10 miler gave us a reason to feel a little less guilty about the food we would eat that weekend.

There was an option to have race-morning packet pick-up (for some extra $), which really helped us out-of-towners.  We arrived in town late the night before the race, checked into our hotel, which was near the start, and got some rest.  The next morning we woke up bright and early for the run.  It was a beautiful morning, and it was nice to be able to walk to the start line just outside Solider Field. The day would get a bit warmer, but the morning gave us some great running weather. 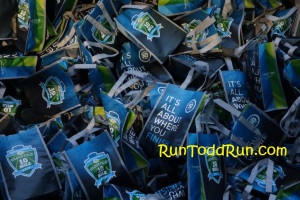 Swag Bags stacked as far as you could see! (Kind of)

There were 18 Corrals or so, and we started in Corral 9, which gave us a good view of the start line, based on how they arranged the corrals on two different streets.  The race, as you may expect, was centered on honoring those who gave all serving our country, and those who continue to serve (Soldier Field and Memorial Day go well together, obviously).  The ceremonies at the start were very moving, and about 20 minutes after the first corral went off, it was our turn.

On The Way To Our Corrals – Also the site of the post-race party.

The course was an out and back along Lake Michigan and part of it utilized Lake Shore Drive until the turn-around point.  We turned around at about mile 5 and returned via a path along the Lake.   All along the way there were pockets of supporters and folks cheering, in addition to a couple of bands which livened things up a bit.

As you might expect, with such a sunny day, the views of Lake Michigan were gorgeous, and the route after the turn-around gave us some great views of the Chicago Skyline. 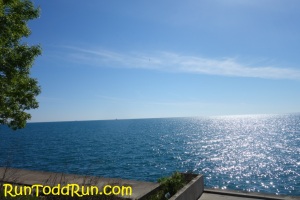 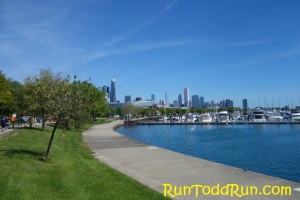 The only little drawback I noticed was that being able to see Soldier Field from so far away was a bit of a tease, as the finish never really seemed to get closer.  We had not really trained specifically for this race, so the last couple of miles were a bit of a struggle.

The finish line seems so close!

One of the main selling points of the run is that you get to finish on the 50 yard line of Soldier Field (“It’s All About Where You Finish”).  The route to get to the 50 took us past the field and through a service entrance.  After a quick jaunt through the bowels of Soldier Field (which my Garmin did not like), we entered through a tunnel onto the field.  It was a really great way to finish the run. 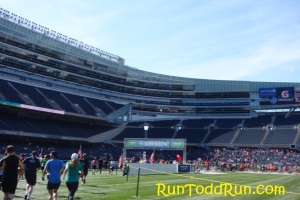 Our time wasn’t great, but this run was more about enjoying the day and kicking off our anniversary weekend by burning some calories that we would make up for later.  It was also really great to be handed our medals by active service members, which is another unique touch to this race. 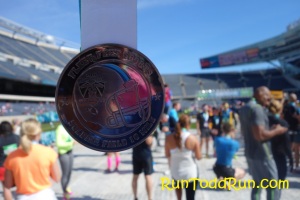 Overall, this was a great race.  It was extremely well organized, pre-race emails were answered very quickly, and the post race amenities and party were great (free stretching, beer, concert, exhibitors, etc.).  The weather really helped as well.  I would certainly recommend it for anyone looking to a good way to run in Chicago.