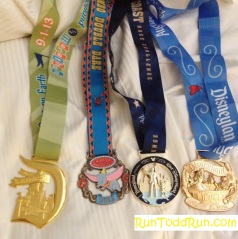 After waiting since we signed up at Marathon Weekend in Walt Disney World in January, we finally got to experience the Dumbo Double Dare over Labor Day weekend.  By the end, we earned 4 medals: Disneyland 10K, Disneyland Half Marathon, Dumbo Double Dare, and Coast to Coast.  I could start this recap discussing the horrendous lines at the bib pickup and the madness at the expo surrounding the RunDisney merchandise, but I decided to leave that out.  The people we got to see and meet, and the surroundings of Disneyland, outweighed the temporary frustration that marked the start of the weekend.  And hey, I got some cool new RunDisney New Balance shoes!

The race weekend started with the Disneyland 10K, which followed the 5k by about 45 minutes, which made getting to the corrals another experience in poor cattle herding.  Still, the course through California Adventure and the Magic Kingdom was great.  Having a course that was contained mostly in the parks made it a really cool race with lots of opportunities for character pictures.  You can see a few of our pictures here.  We took it easy on the 10k, thinking we would save a bit for the half marathon the next day, and the heat was not our friend. 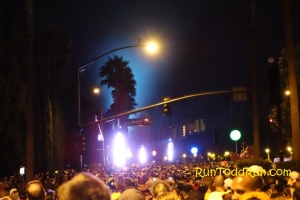 A few of our friends waiting to start

For the half, we woke up and made our way toward the corrals at about 4:30.  This was about an hour and a half later than we get up at the Walt Disney World Races.  After making it to the corrals, the typical RunDisney energy was in the air. 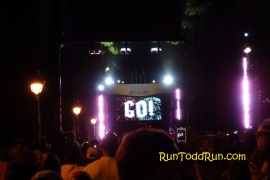 We headed out past the Grand Californian Hotel and around the back of California Adventure. Those first few miles took us through California Adventure and the Magic Kingdom.   The cast members, even the custodial team, were there to cheer the runners on as always.  This really helps make for a great experience. 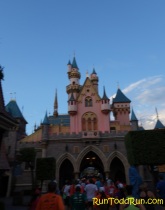 Now we’ve run through both Castles!

Afte exiting the Magic Kingdom, we were on to the streets of Anaheim, headed out to the Honda Center and Angel Stadium.  On the way, we were treated to hundreds of classic cars, hula dancers, dance teams, bands, and cheerleaders.  It made the trip much more enjoyable, despite the heat.  Angels stadium was much better than I had expected.  The hundreds of Boy Scouts and Girl Scouts were very supportive and made for a great atmosphere in the stadium.

Angels Stadium was at Mile 9 mark, and we passed on the iced donuts being handed out on the way in.  After running around home plate, it was back toward Disneyland.  We ran through the backstage area of California Adventure, around the back of the Disneyland Hotel, past Downtown Disney and through the finish line.  All along the way, we had cheer groups helping us along.  I also saw my favorite sign of the whole event (but did not get a picture):  “$175 for a half marathon — only $37.50 to go!” 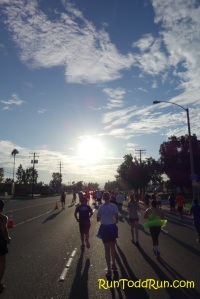 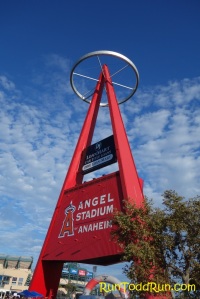 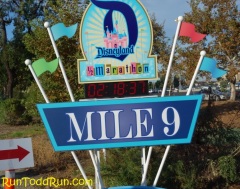 One of the coolest parts of the race for me was getting to meet Joe Taricani of The Marathon Show. I asked for a picture with him, and ended up being interviewed!  I got to talk a little Boilermakers with him.  Not only did I get a picture out of it, that photo also made it into his video recap of the race.

With Joe of The Marathon Show!

You know you are a real runner when you get one or two of these . . . not the medals.

I end the post with that video from the Marathon Show.  I think it gives a great recap of the race, and I really like Joe’s thoughts on the race and RunDisney at the end.  I am honored to be in the picture at the 7:25 mark.  Be sure to visit Joe and The Marathon Show at http://www.TheMarathonShow.com.

Until next time.  Only 4 more to go this fall!